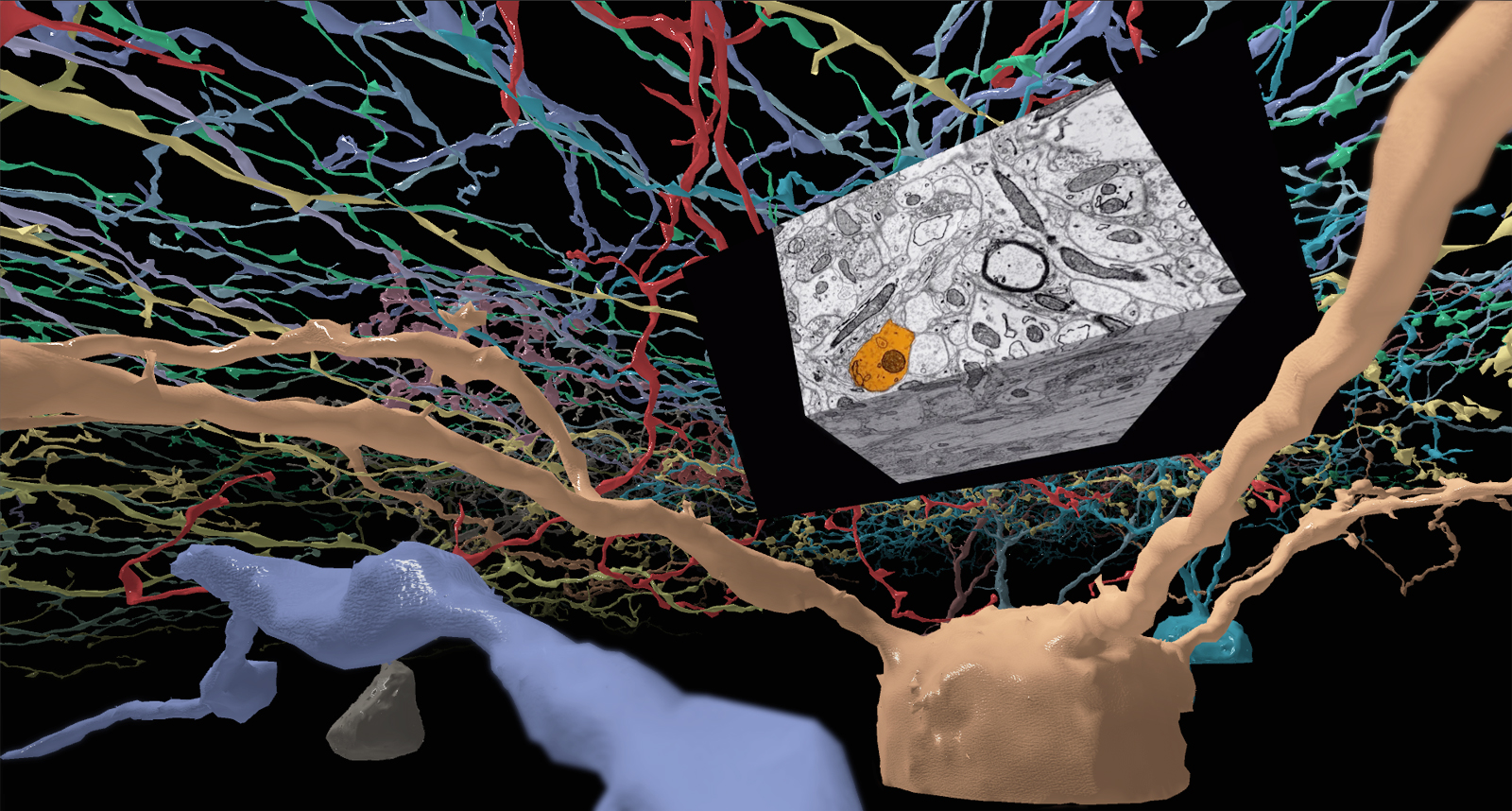 “Your brain is an exquisite network of 85 billion neurons connected through 100 trillion synapses. Tens of millions of electrical and chemical impulses flow through this network every second, resulting in your very ability to think and feel; to learn and love.” —Amy Robinson, Director @ Eyewire.

Last year we launched a collaboration with the team at Eyewire—A game to map the brain. Eyewire is a neuroscience project that started in the lab of Dr. Sebastian Seung at MIT, but has since spun off into a non-profit located in the Boston WeWork space. They have succeeded in crowdsourcing part of their research by turning it into a web-based game. Over 180,000 players from 150 countries work to trace the path of neurons through microscope image volumes, with help from some custom image-processing AI.

Eyewire has assembled a dedicated group of citizen scientists who compete to score points, form teams, and earn achievements. It’s one of the best examples of distributed gamification that I’ve come across. They are tapping into a bit of humanity’s vast cognitive surplus to help improve our understanding of the brain.

Their AI is actually pretty good at tracing neurons, but it can’t (yet) match the acuity of the human visual system in identifying subtle boundary features and image patterns. The players help guide the automation by accepting some of its findings, rejecting others, and clicking to suggest areas that the software missed. The following video shows how a neuron can be traced through an image volume slice-by-slice, then reconstructed into a solid 3D structure.

So where do we come in?

We approached Eyewire last year with an offer to turn their research data into an interactive VR experience for the Oculus Rift DK2. Creating visuals from research data, a.k.a. scientific visualization, is a core part of our work here at Indicated. In our VR experience, the viewer shrinks down to the nanoscale and flies through a field of 16 neurons that were discovered by players in EyeWire. As with most VR content, video capture doesn’t really do it justice. If you have a Rift, head over to Oculus Share and you can download it for yourself.

In this post we’ll dive into the approach we used to convert Eyewire research data into game engine assets and ultimately, an interactive VR experience. We developed this application in Unity and released it for Windows PCs. Fair warning, this is going to get a bit technical… 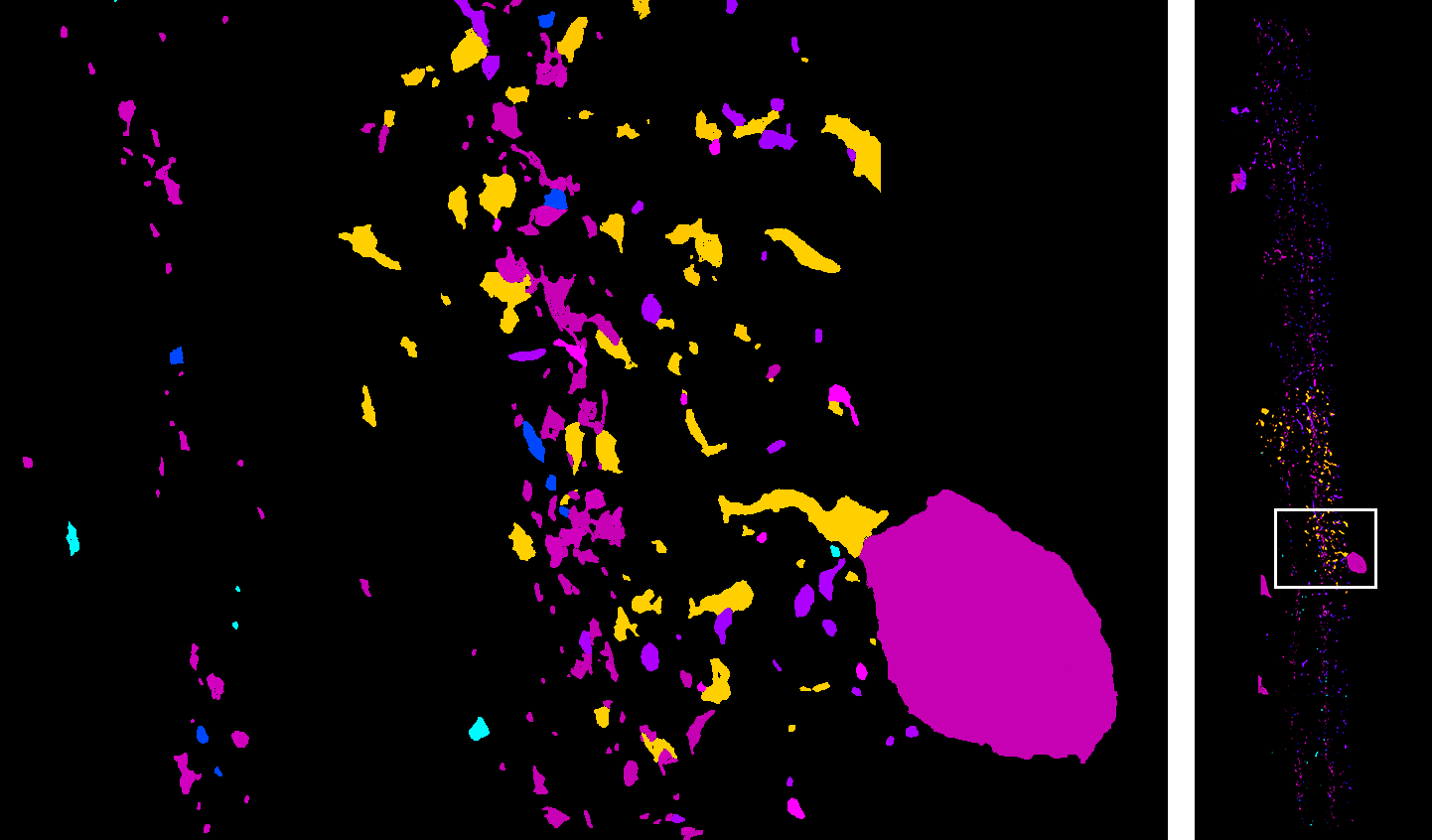 The entire dataset was 2432 x 10496 x 6527 voxels, for a total of approx. 167 billion data points in the full 3D grid, although the majority of those were black “background” values. The dataset takes up roughly 650 GB when uncompressed. To understand how the data is grouped, imagine gathering together all of the “purple” voxels from the whole grid and throwing away the rest. After doing this you, would have one single complete neuron.

We created a C++ utility that searches through the source data for sets of voxels with the same index and adds them to an OpenVDB grid as they are located. As an intermediate step, we saved out individual neurons as .vdb files, which is an efficient way to store complete voxel structures without losing any information. More importantly, the structures are stored in their original coordinate system, which means that the neurons can later be loaded all together without messing up their relative offsets. The following image shows what’s stored in the .vdb file after we isolated one neuron from the source data. 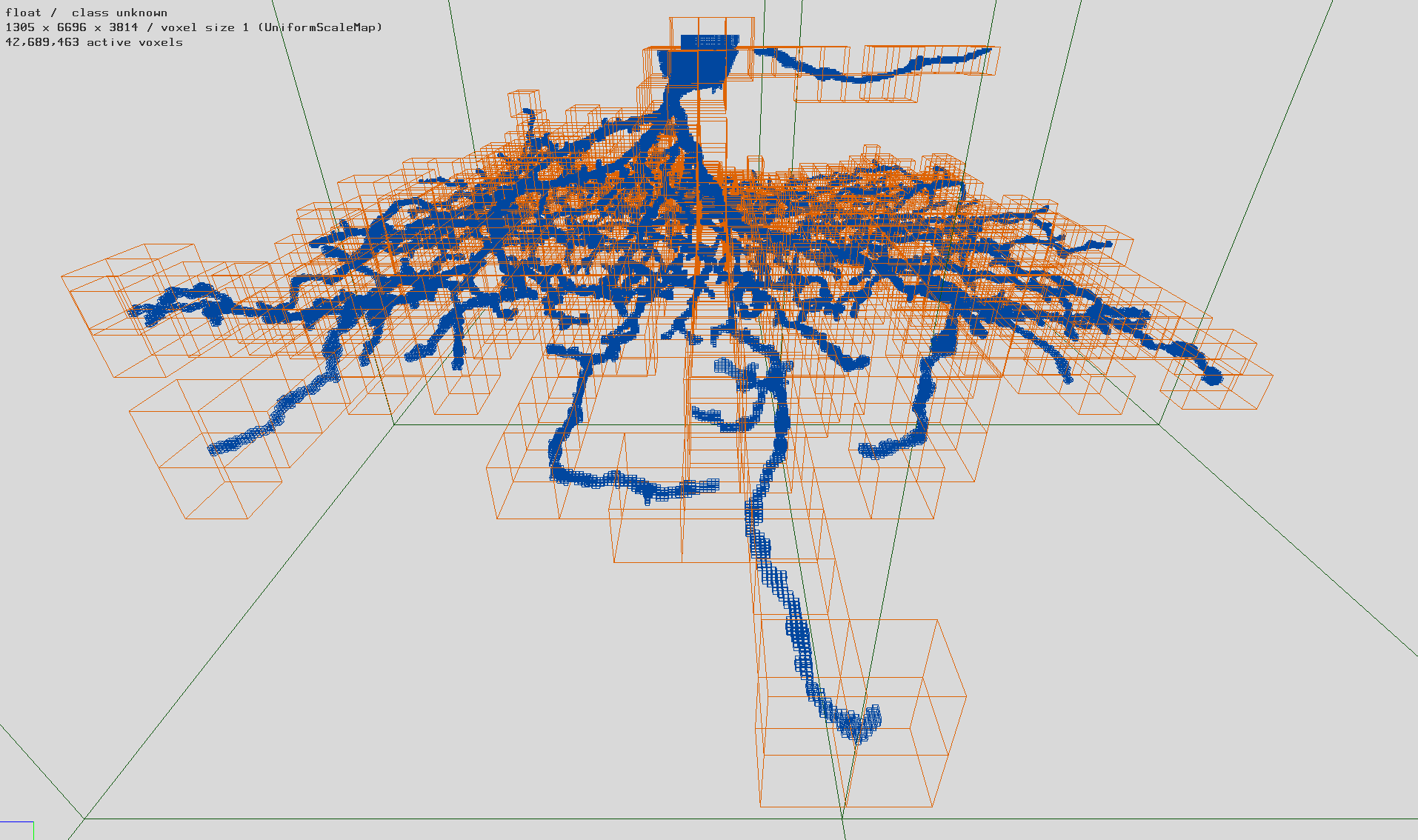 Unlike the source data, only the orange grid locations are stored in the file, saving a massive amount of memory in comparison with the full grid. The cell shown here is made up of about 43 million voxels and was saved to disk as a 30MB .vdb file.

The OpenVDB library also includes methods to convert sparse voxel grids into polygonal meshes. The meshing process can be tuned in order to control the total number of polygons in the output meshes. We selected meshing parameters to ensure that all 16 neurons could be displayed simultaneously by our real-time engine (more on that later) while at the same time avoiding oversimplification. Simplifying a mesh too aggressively can result in distracting visual artifacts and large gaps in the model surface. 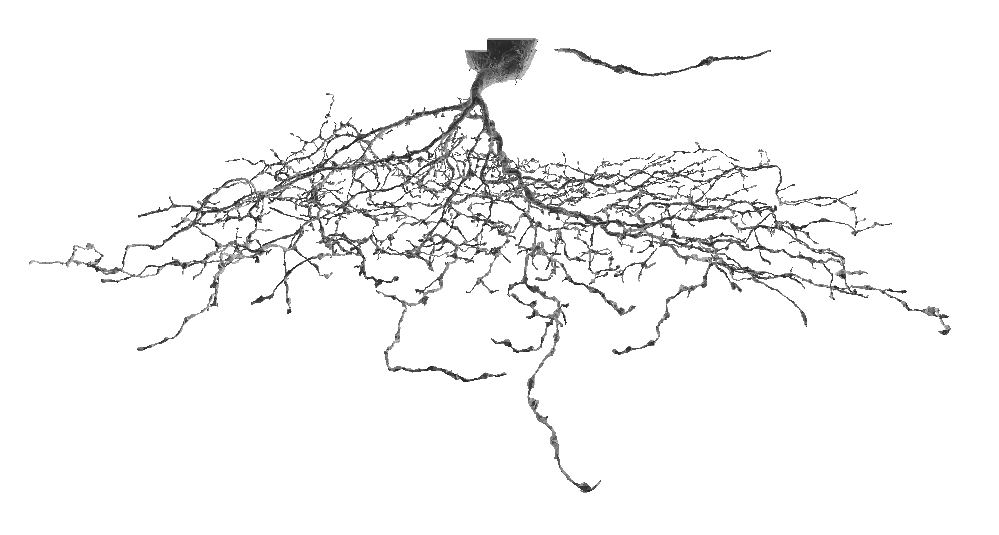 Since this experience was designed to be run on a typical VR gaming PC, we could generate relatively complex meshes. The 16 neurons in the experience add up to about 3 million polygons total. We could have pushed this further with various optimizations like level-of-detail (LOD) meshes, but will have to save that for the next version. Unity also supports GPU mesh tessellation which did make the models look gorgeous up close, but we found this compromised the frame rate (which is critical to maintain for a good VR experience).

We encoded the colors for each neuron in the mesh vertices so that we could use a single material for all of them. We also used a technique called tri-planar texture mapping to add a normal map without using UV coordinates, giving the models a shiny/bumpy look up close. 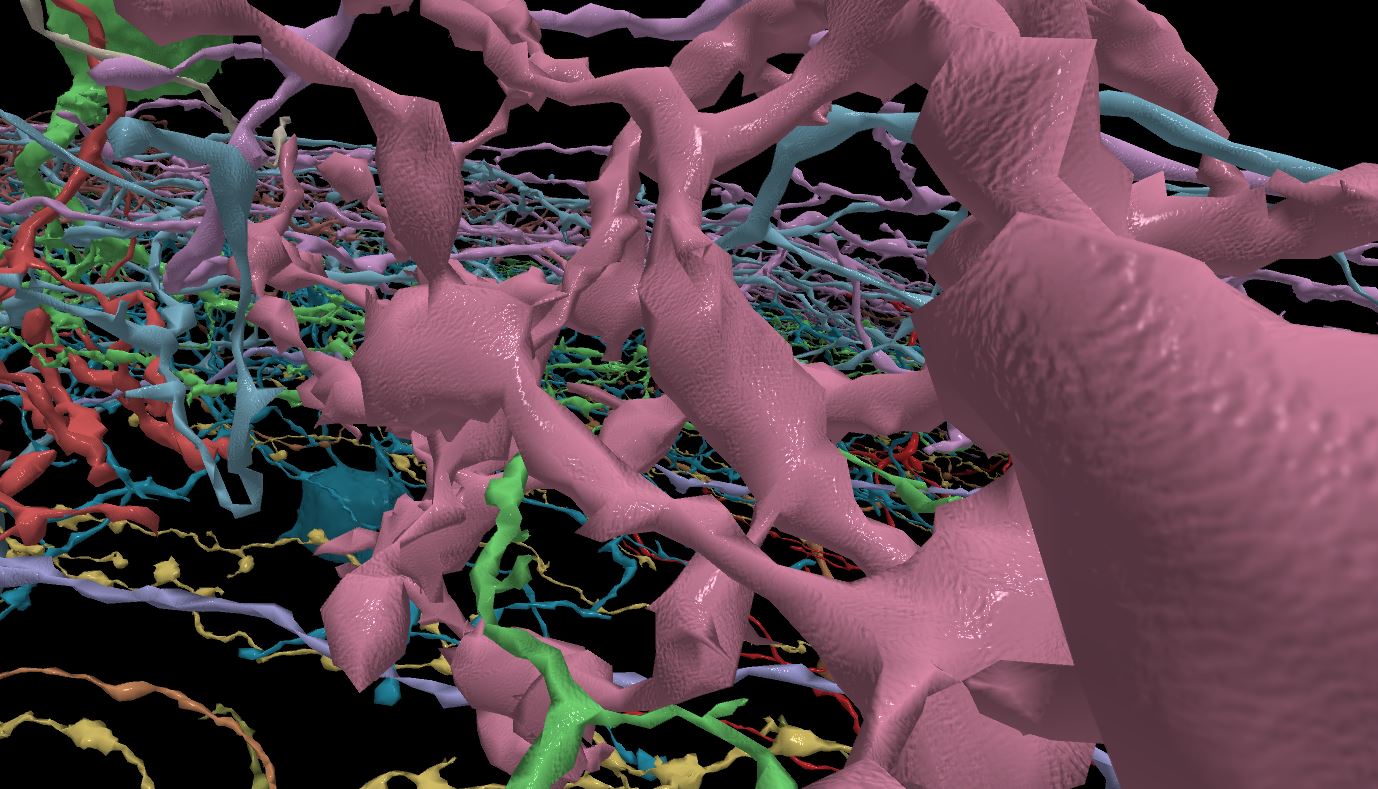 More than any other interactive platform, VR content must be carefully crafted to avoid causing nausea and eye-strain in viewers. The list of VR Best Practices is long. Here and here are good places to start.

In developing Neuron Safari, we made the following design choices:

Indicated was invited to share some of our work in interactive scientific visualization at the NIH Science in 3D Conference in January, 2015. We debuted Neuron Safari there and had a positive response from the attendees who tried the demo. 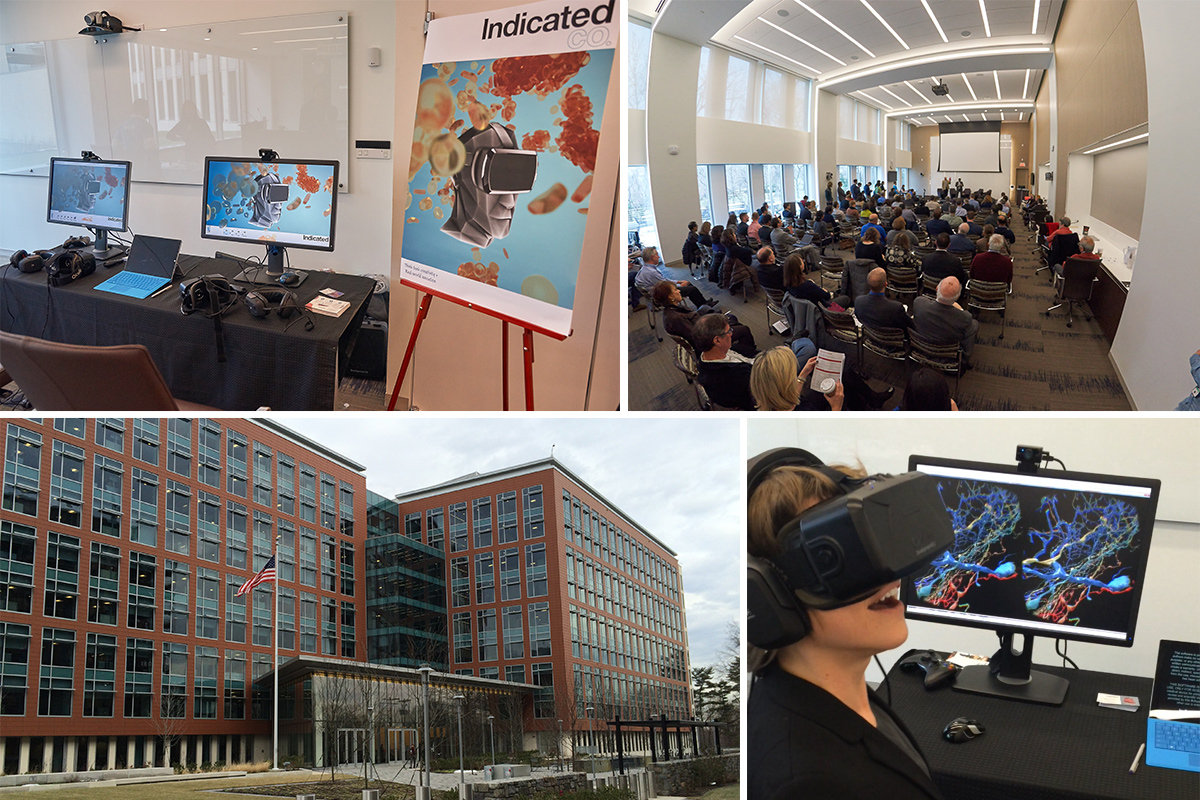 TechCrunch—EyeWire Is Making Neuroscience Research Cool Again
Kevin Raposo, a journalist for TechCrunch, had an opportunity to try out Neuron Safari and wrote: “I was blown away. As soon as I strapped myself into ‘the rift,’ I was immersed in an environment that was filled with highways of neurons sprawled out in every direction. It was intense…This was one of the coolest experiences I’ve ever had with the Oculus Rift.” 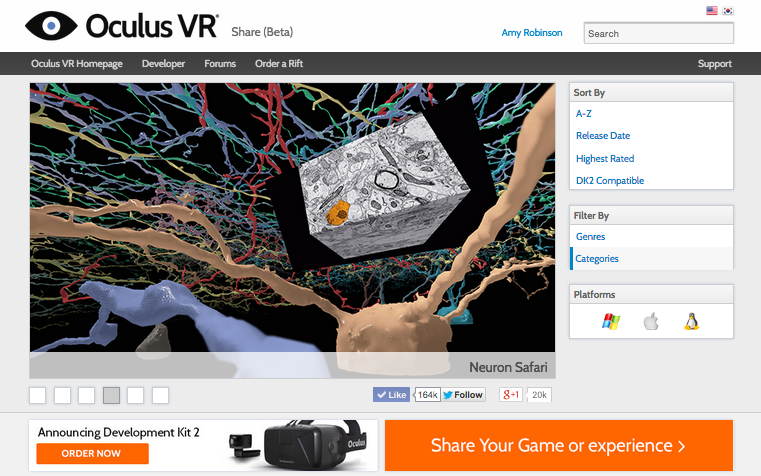 A few of the neuron surface models we produced from Eyewire data were used in 3Scan’s Pieces of Mind exhibit that appeared at the San Francisco Exploratorium from January to March of this year.

The future of VR is social and collaborative. The next iteration of Neuron Safari will bring multiple users together in a single virtual environment, allowing them to explore together and engage with content in a synchronized experience. 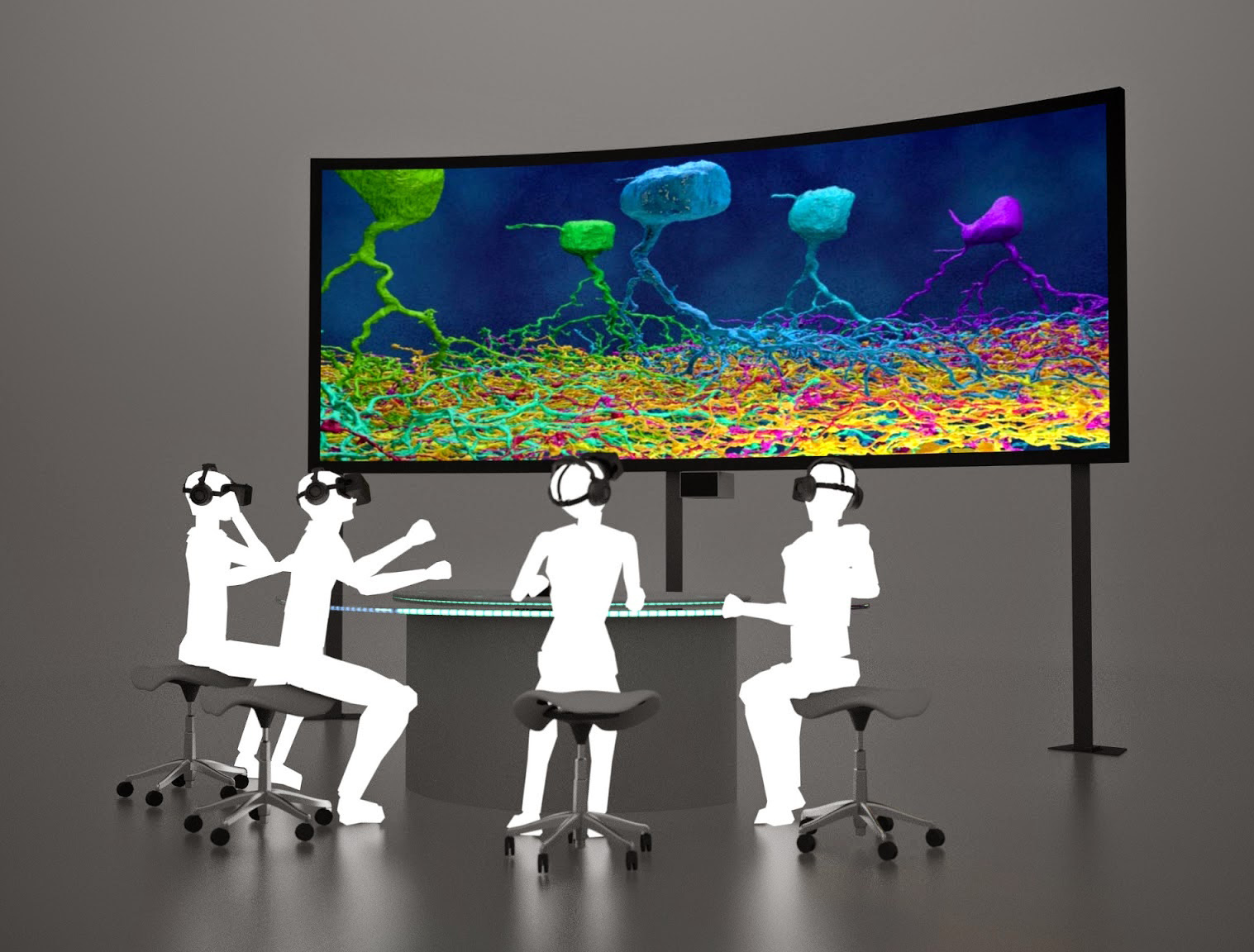 Get in touch to learn more about how you can use VR in immersive training, marketing, and conference applications.